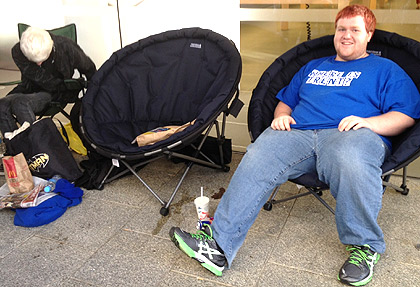 Trent Lloyd is the first in Australia to get the new iPad (iPad 3). Photo credit: WAToday

Since the first batch of Apple’s 3rd generation iPad called new iPad (iPad 3) has been out in the market, the most important questions that most people will think before buying the new iPad are:

Question 1: How much storage is enough for the new iPad (iPad 3)?

I strongly encourage you to buy either 32GB or 64GB and if they have 128GB, you should buy that also, of course, provided you have the extra money to burn. The reason behind this is that the new iPad is using Retina-display and many of the apps especially games apps will have bigger size because of the Retina-display function. Moreover, apps will get more functions and better graphics and all these will require more space.

So, I strongly recommend that you should purchase at least 32GB new iPad (iPad 3) model or 64GB unless of course you are really tight in cash.

Question 2: Which colour of new iPad (iPad 3) should I buy?

This is a rather controversial subject. Many pure enthusiasts will claim that viewing pictures and video is the best with black frame instead of white. They say that white frame will distract the viewer and the color contrast is not so explicit. My wife has a black iPad 2 and I have a white iPad 2. My conclusion? Same. There’s not much difference but rather based on old habits. I still prefer to buy white because it stands out and looks very cool. Still, this is very personal. I can assure you that watching video and viewing photos are not affected by the white or black frame. So, the choice is up to you. 🙂

After experiencing take around an extra device which is the MiFi, I find that it’s rather troublesome. You need to beware of the battery level of the MiFi and carry it around is not convenient for guys and sometimes you need to carry another extra charger. 🙁 So, my advice is since new iPad (iPad 3) supports personal hotspot, you should consider getting a 3G/4G model. 🙂

With its huge battery capacity in the new iPad (iPad 3), you can opt to use 3G instead of 4G to conserve the battery life.