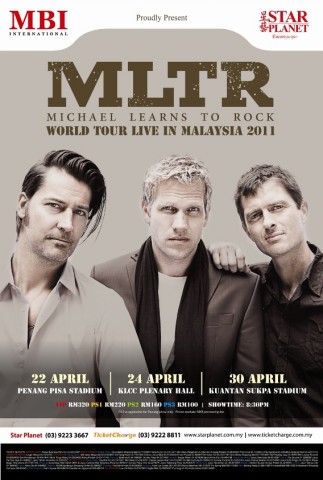 Good news for those who are fans of Micheal Learns to Rock (MLTR), the Danish band that melts our heart with their popular songs such as Paint My Love and 25 Minutes.

My first few English pop songs that I have listened during my younger days are from Micheal Learns to Rock. 25 Minutes. Very touching and sad song. That’s how I get to know about this Danish band, MLTR.

Now, MLTR will be coming to Malaysia this April 2011. Their first stop is at Penang International Sports Arena (PISA), Penang on April 22, 2011. After that, they will be rocking Kuala Lumpur at Kuala Lumpur Convention Center’s Plenary Hall on April 24, 2011. Their last stop in Malaysia is in Kuantan SUKPA Stadium, Pahang on April 30, 2011.

Comprising lead vocals and keyboardist Jascha Richter, drummer Kare Wanscher and guitarist Mikkel Lentz, the well known Danish pop trio has more than 8 million recordings to its credit since its professional debut in 1991.

Few of MLTR’s chartbuster albums include: Colours, Played on Pepper, Nothing to Lose, Blue Night and Eternity. Some of their evergreen hits include: The Actor, Sleeping Child, Someday, That’s Why (You Go Away), Breaking My Heart, It’s Only Love, Nothing to Lose, 25 Minutes and You Took My Heart Away.

Tickets can be purchased online through www.starplanet.com.my and www.ticketcharge.com.my. Or you can call Star Planet at 03-92233667 or Ticket Charge at 03-92228811 for more information.

This show is brought to you by MBI International and organized by Star Planet.

If you are going for this show, share with us your experience.

Update: You can’t buy tickets in Penang. You have to purchase the tickets online through the website that I have written above. Below is the latest price.