Finally, Maxis has revealed their Blackberry Playbook prices and bundled plans ahead of their official launching on 16th July 2011 at KL Convention Centre. The full details are as below:

The RRP for each models of Blackberry Playbook is as below:

If you are already a Maxis BIS subscriber, then you will get another RM100 off from the Blackbery Playbook price. 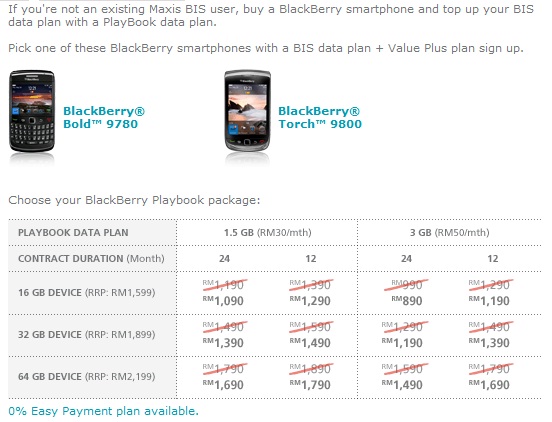 If you are a fan of WebOS, then head to their official launch early to be the 1st 600 customers who purhase the Blackberry Playbook because Maxis is giving [a limited edition Blackberry Playbook convertible case and HDMI cable kit] worth RM288 and Free Wi-Fi Hotspot during your contract period (either 12-months or 24-months).

So, are we expecting a queue like Maxis Samsung Galaxy S II launch?

If you are interested to book your , oops Playbook, go to Maxis booking page.