Specification: iPhone 5 VS iPhone 4S VS Galaxy Note II VS Galaxy S3 VS HTC One X

iPhone 5, the lighest & thinnest iPhone ever. It is also one of the lightest smartphones available. iPhone 5 also has the smallest display screen at 4-inch compared to its high-end rivals that are sporting 4.7-inch to 5.5-inch. Running A6 chip with Cortex A15. It is still unclear how many cores are there in A6 chip but will be confirmed soon. 8MP shooter with a Sapphire glass as the camera glass cover. And also running the latest iOS 6. One of the downside of iPhone 5 is the lack of NFC when this feature is a standard in most high-end smartphones.

After iPhone 5 is revealed this morning, most people will be start thinking, ‘Which smartphone should I buy? iPhone 5 or Samsung Galaxy S3 or should I wait for Galaxy Note II?’ Well below is the comparison table of all the high end smartphones of most phone manufacturer based on their specifications and dimensions only. I know that Nokia 920 and Motorola Razr HD are missing in the table. I will try to find them out soon.

The overall and detailed analysis of each feature will take some time. So, at the mean time, have a look and see which smartphone has the most bang for your buck in term of hardware. 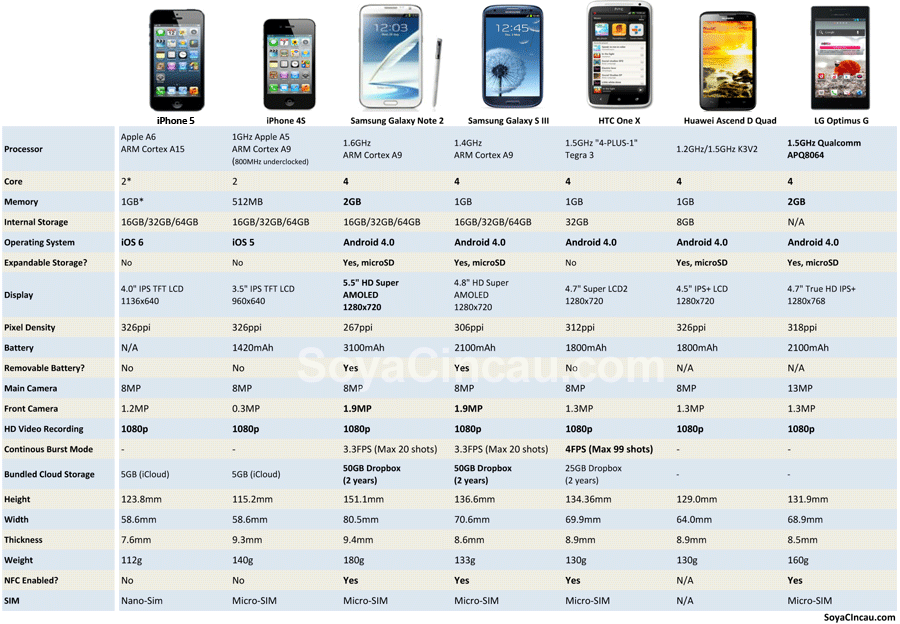 * details to be confirmed.

iPhone 5 VS iPhone 4S VS Galaxy S3 VS Galaxy Note II VS HTC One X VS Huawei Ascend D Quad VS LG Optimus G. Click the image for larger view.

I don’t usually buy the first generation of new products for fear of bugs and unknown problems. One another thing to concern is the different OS. iOS still have the superior lead in term of user experience and fluidness and responsiveness. Android for most people except those who knows how to root and install custom ROMs, is quite laggy and the user experience is not on par with iOS. This is my personal observation and does not represent everyone out there. I think Google and Android phone makers will have to quickly roll out Android 4.1 Jelly Bean to all their high-end smartphones to enhance the user experience and increase their market share.

I think I will adopt the wait and see method and see how does Samsung Galaxy Note II compares to iPhone 5 when Galaxy Note II is out during end of 2012.