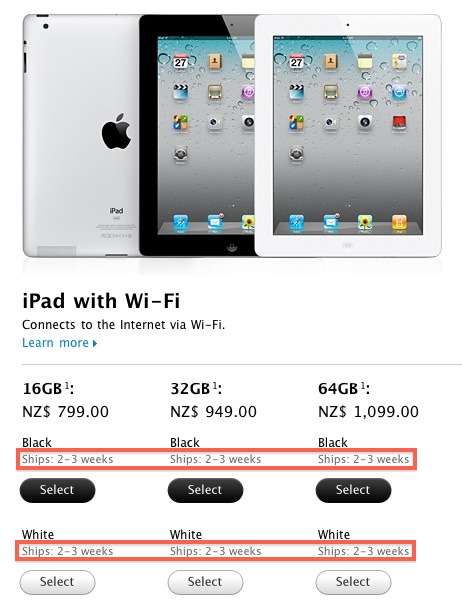 Even though Australia & New Zealand are the first two international countries to have iPad 2 sales online, potential customers might be setback by the 2-3 weeks shipping estimates. Apple certainly is able to ship iPad 2 earlier than the shipping estimates but Apple doesn’t want to over promise but under deliver.

At the mean time, let’s have a look of the prices of all iPad 2 models in Australia and New Zealand.

Prices for all iPad 2 models in Australia:

Prices for all iPad 2 models in New Zealand:

All prices of iPad 2 models are converted using XE Currency Converter and do not reflect conversion value.

There’s a slight difference of RM56 – RM79 between Australia & New Zealand prices of iPad 2 models. If you can’t wait for the launch of iPad 2 in Singapore, then I suggest that you buy if from Australia. At least it’s cheaper. Moreover, you have a 10% GST refund if you leave the country in a certain period of time.